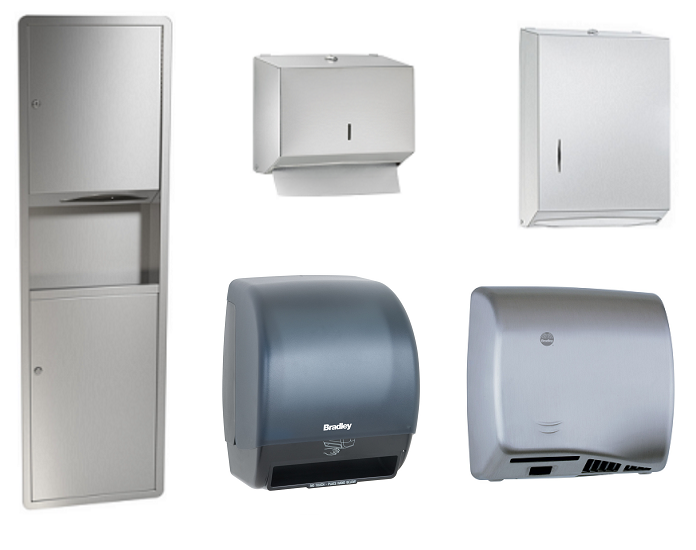 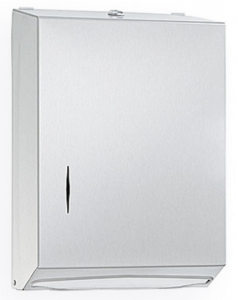 A standard paper towel dispenser for commercial restrooms can come in many variations. Most commonly these are surface mounted to the wall and have a slot in the bottom that allows access to the paper towels. Some are made with a slot in the front face or side of the unit that allows for visual observation of how full the dispenser is. So, instead of having to open the unit every time to check the fill level, you can just see through this slot and quickly verify if it needs to be refilled. 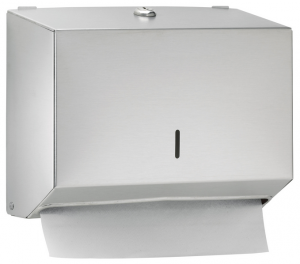 Some of these dispensers are combined with other accessories such as a waste receptacle. These combination units can be surface mounted, semi-recessed, or fully recessed mounting.

An automatic paper towel dispenser is just like it sounds. These have a hand motion sensor that allows you to simply wave your hand in front of the sensor and the dispenser will automatically dispense the paper towels. This allows for more control of how much paper towel is used with each use. These must be connected to power via electrical wiring or can be battery powered. The battery powered dispensers will often have an indicator light that will flash when battery power is low, letting the maintenance staff know that it is time to replace the batteries.

Automatic air hand dryers are a popular alternative option in lieu of using paper towel dispensers. Hand dryers come in many varieties and are electrically wired for power. Many can be calibrated to activate for a certain amount of time that you set and at a certain level of power. The major benefit of using an automatic air hand dryer is that there is no need to refill paper towels, which can reduce the time and cost of maintenance. They are also built in many designs and finishes for an attractive appearance. 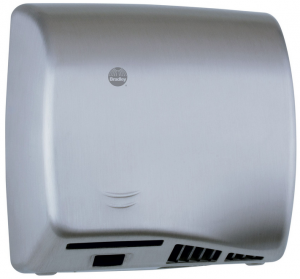